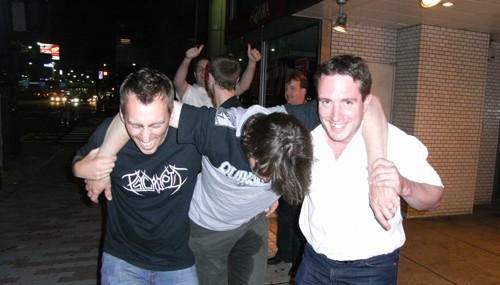 It’s that time of the year again…, post-Kobe, and everyone is talking about the performance of the Wombats both on and off the field. Following last year’s hugely successful event, anticipation was high for an even better tour, and as such 13 Wombats, 2 more than last year, ventured down to Kobe to realise this dream. Before starting on the Wombats performances, we should first pay commendations to Russell, Mick and Buckets for showing us the sights of Kobe on the Saturday night, and a special mention to Rob McKenna for his grand efforts (skulling beer this year without managing to throw up) at the izakaya that I am sure no gaijin will ever be allowed to enter again (but more on that later). These 4 Kobe boys certainly held their own against the more seasoned Wombat outfit, and we look forward to more of their number joining us on the town in future years. But what you’ve all been waiting for. Let’s begin with the tour virgins.

Was obviously nervous on the shink down, feeling the pressure of his first Kobe tour. Quickly warmed up though with one too many renditions of “I like big butts and I cannot lie”…..including the dance moves… and was on fire by the time we lobbed in Osaka. Now goes by the nickname “Yellow Pages”, for he certainly “let his fingers do the walking”.. Now suspect he will be singing Alicia Keys songs instead. Rating: 8/10

Clearly came up with the worst nickname, but didn’t let this deter him from an eventful Friday night. Let his opinions be known regarding the standard of DJ work at S&D’s, which was appreciated by all. Seemed a bit lost without a bottle of JD by his side when in the presence of Wombats, but will be better for the run. Did a great job along with Rayos getting Killer into a taxi. Rating: 5.5/10

On his first and last Kobe tour, and leaving the country in only 2 weeks meant there were to be no excuses. Highlight of the weekend was certainly his dancing on the floor at Ryan’s, while falling asleep at the gyoza shop at 5am on Saturday morning was an indication of the enormity of the Thursday night before. Got bombarded with skulls and double-skulls at the izakaya given the occasion, and performed admirably. Rating: 6/10

Nickname suggested he had his sights on the top job, but instead settled as off-field captain as he led the Wombats on a merry dance around the streets of Osaka early on Saturday morning. Chiang Mai practice served him well as he performed an all-nighter, and backed it up on the Saturday night with another gutsy performance. Second only to Killer in alcohol consumption, and last seen biting the captain’s nipples. Rating: 6.5/10

An as usual solid performance from Curly, although looked a little confused at times that the Wombats were playing cricket and he didn’t have to drive somewhere. Progressed to skulling water at the highlights session rather than making the nominator skull, so perhaps there is a seachange on the horizon. Amazed the locals as he led a rendition of the club song on the stairs of an intersection in Kobe. Rating: 5.5/10

And now for the veterans:

Having escaped from Saitama, went hard on Friday night, and promised pre-game Saturday that he wasn’t gonna drink too much that evening. Was maggoted by midnight. Did however keep true to his assertion not to have McDonalds for breakfast like last year. Fantastic performance in assisting the security guards escort Killer from S&D. Suffered at the hands of the blow-up mattress in the cock forest. Suspect Kobe has not seen the last of him. Rating: 5/10

Another solid performance by Burkey, as he both led and nurtured the Wombats around Osaka. Went to the wrong S&D, which in hindsight may have been the right S&D, but was still seen wondering aimlessly around the streets of downtown Osaka in the early hours of the morning. Couldn’t stand the heat of the tour and took an early shink ;). Rating: 5/10

Bought a new digital camera for the trip, and was seen all over Kinki happily taking photos. Handled his skulls for his fine umpiring performance with aplomb, which should hold him in good stead for when the slamming session is organised to make use of the 1.175L bottle of vodka he won. The only blunder of the weekend was wearing a beige shirt with beige pants for a brief time on Saturday night. He had the foresight to quickly change once he realised this but surely will make a concerted challenge at Curly for Worst Dressed Wombat at the end of the year. Rating: 6/10

Was always gonna struggle to repeat last year’s performance, and getting completely hammered on the shink certainly did not improve his chances. Ended up spending hours in the streets of Osaka vomiting (and sleeping), while a local flicked a cigarette butt at him, resulting in a burn hole in the crotch of his jeans (at least that’s his story how the hole got there). Did recover somewhat to lead the Wombats towards the dance floor on Saturday night at Ryan’s, and was last seen wearing a plastic raincoat in the streets of Osaka. Perhaps knocking over the JD & Coke in the shink was a god-send. Rating: 6/10

Unusually quiet performance from the President. Tried his best with the clientele (to help out the single blokes) at S&D, but by his own admission was always pushing shit up hill (i.e. they wouldn’t have a bar of him). Did his best in the streets of Kobe early Sunday morning, but failed again. All this too after he got an “Entry ->” tattoo just above his arsecrack to improve his chances. Will be looking forward to a bigger and better tour next year. Rating: 5/10

Probably (ed: DEFINITELY) the main reason we were told to quieten down so many times on the shink. His two nights in Kobe were certainly at the opposite ends of the spectrum. Didn’t manage to make it out of the KRAC Friday night, the effects of ¾ of a bottle of vodka taking their toll as he made it a South Australian quinella in the vomiting stakes. The second night was back to his usual self…. Nothing with a pulse was safe. Looked set for a huge total, but a 36 year old’s marriage was more important. Succumbed to a Chinese massage and got his money’s worth. Rating: 7.5/10

Seeing a new buzz cut on the man at Shinagawa told you he was set for a big weekend, and he did not disappoint. Apologised profusely, and often, to the shink cabin attendants for the degree of noise emanating from our end of the carriage. Woke Saturday morning wondering why he had sore nipples. Discovered the hard way that fresh lemon juice is no substitute for proper, laboratory tested eye drops, but at least his call of “Do the other eye!” gave him the opportunity for a second opinion. Somehow manages to back up day in day out. Rating: 7/10

And saving the best till last:

Words will not do justice to the weekend Killer had. But I’ll do my best:

Sat 3am: Dragged out of S&D by bouncer, almost comatose.

4:30am: Falls asleep on the footbath outside the gyoza shop, but is revived by Curly as he drops cold water on his face.

5am: Does not heed the call of fellow Wombats to get in a taxi, as has plans to kick on in Osaka, but promptly falls asleep again

7am: Wakes up to find his wallet missing, and only his driver’s licence, gaijin card and health care card in his pocket (which the thief had kindly removed from his wallet and placed in his pocket). Borrows money from a local and makes his way back to Kobe.

Lunchtime: Decides not to cancel his credit cards, because “They’re Orstralian credit cards”

10pm: After some more punishment at the highlights session (with mates like the Wombats, who needs enemies?), falls asleep at the izakaya. After an hour of slumber, attempts to stand, leaving the rest of us thinking he may be getting ready to vomit, as he had a slightly pained look on his face. However, quickly falls asleep vertical, and Burkey asks him if he wants to go to the toilet. Next thing we know, the pained look has disappeared, the tension in his body has eased, as a GOLDEN puddle of urine slowly starts enlarges around his feet. Our first thoughts were not “Is he OK?”…. no, no, no… our first thought was “GOLDEN THONG”!! Someone from the KRAC had the intuition to put a couple of empty beer bottles on the floor in a vain attempt to make it look as though we had spilled beer. Whoever you were, you were clearly too sober, but your invitation to MENSA is in the post.

Sun midnight: Carried into a taxi by Kyle and Luke, dreaming of the Golden Thong.