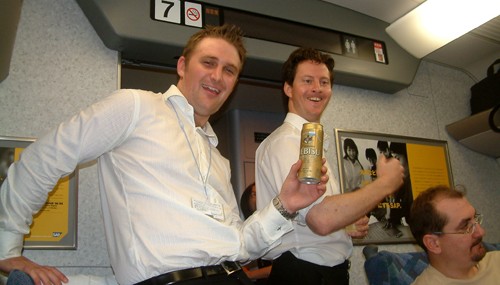 Eleven Wommies all made it on time to the rendevous point at Shinagawa Station Newdays at 6.30pm Friday 30th June clearly anticipating an enormous weekend in Kobe. After marauding the kombini of extra supplies we all jumped on the Shink hoping to get absolutely spastic during the night and to possibly have a game of cricket tomorrow. With 11 of us and only 2 rows of 5 seats there was one lucky traveller to claim the spare seat amongst the sararimen, however under the Skippers orders that seat was specially reserved for the Wombat who unwittingly made any stupid comment (at the discretion of the committee). Although surprisingly the spare seat never was occupied, I was sure we had our fair share of stupid comments since all of us bouncing off the walls with part excitement and part early-inebriation, so much so the ticket inspector had given up cautioning us about the noise as we zipped past Shizuoka. However by a couple of knocked over tinnies, a few nampa attempts from Pup, and a half-tanked mob of quadrupeds we had arrived at Kobe to be welcomed by KRACs very own looney-pair in Robb and Russ who kindly escorted the raucous Wombats crusade from Shin-Kobe before we could get ourselves into any irreversible trouble.

After plonking our bags in the sleeping quarters, we had quickly established residency in the KRAC bar where most of their cricket club had also assembled. Many stories-over-beers and a game of darts later (which had One-Eye Shacksie’s partner Aimless Ainslie almost erase the lining of his throat on an overly generous winner’s-shot of tequila) we still had enough juice to be enticed out into the depths of Kobe. However a very large group of us was split somehow split along the way, resulting in some of us stranded in Ryan’s Irish pub trying not to be antagonised by some of the Kobe weirdo’s and the rest in PogoDog land sending sms’ to the Ryans crowd to the tune of “Oi C@nt, Im in a pub in Kobe, where are ya?”

Soon after we all met up in Sully’s dance club, which was dead as a doornail in the bottom of a Snowtown barrel and prompted some of us to suspect there may have even been a serial killer amongst us knocking off party-goers as they came in the door (this editor personally suspects Shacksie as he absolutely murdered me at pool). Anyhow as we moved on we found even more space and even less women at the infamous Second Chance Bar, and 11 wellied Wombats stuffed into a small bar had (wait for it) NO-CHANCE – although that didn’t stop some of us. Given that Germany and Argentina were boring all of us to sudden-death and then some with penalties, some of us stupidly thought that Sully’s, Ryan’s, PogoDog, (ANYWHERE!!!!) had picked-up by 3.30am. It hadn’t. Alas most of us tried our final chance in Second-Chance only for most of us to be so absolutely chanced-off with Kobe this Friday night to give-up on our chances and chance it back to KRAC. Some of the (unnamed) stragglers tried their hands (or should I say “someone else hands”) on the dying Kobe nightlife. Stumbling back into the suffocating stench of the KRAC burrow littered with passed-out, drunken, farting, stinking, half-naked Wombats (some have suggested it resembled a cock-forest, but that has yet to be substantiated) was not the prettiest way to end this editor’s first night out in Kobe… but it was a predictably solid start to the Wombats tour.

As it neared 5am and the eyelids getting heavier than the soupy air of that chamber this editor was certain he had made it clear to his skipper before he went to sleep that “we should NOT bowl first in the morning.”

On Saturday morning Skip woke the Wommies at 9.30am to the tune of “Wake up, we’re bowling.”

The after game dinner was excellent. Food was good and plentiful, and the 2 hour nomihodai was definitely more than 2 hours. The highlights were some of the best inter-team highlights I’ve seen. The KRAC boys have their own version, which is of course modelled on ours, but with a few interesting modifications, so they were used to it and some really entertaining highlights were said.

Sat night we trained it into Osaka as we felt that Kobe was way too small for the Wombats, which was undoubtedly the right decision cause it was a great night. First club was quiet to begin with, but furry muff as it was still early (11:30) when we got in there. But just like THAT, after midnight it filled up. Many a nanpa from the single blokes occurred, and the lasses were generally friendly, if not the highest calibre (webmaster note: that’s a bit harsh I reckon, maybe Dino didn’t drink enough). There was one that was top shelf that Pup was pursuing and had lived in Perth previously so I had a chat with her. Her friend was VERY keen on Pup and it was interesting watching Pup and the 2 chicks, although it didn’t take Pup long to go for the lower shelf sure thing rather than top shelf work. Some hot dancers were there dancing on the bar too, and Chucky, as he does, got completely off his face, and did his best Smoker Impressions. At one stage I thought he was giving me a hickey…

We moved on at about 3:30am or so, although the Run Machine was MIA (tho we guessed correctly what happened to him) and that was a real mistake cause the next place was a real shithole. Although the trip to the next place was notable for Chuck pulling his pants down and walking down the street (as you do) and, then not longer after, seriously saying to me, “Dino, we need to talk about the direction this club is heading in…..we drink WAAAAAY too much piss.” Chuck recalls very little of the night, no surprises there, so when reminded of this comment the following day, he says “Shit, I must’ve been really drunk.” Yeah, no shit Sherlock.

So anyway, we arrive at this next club and it was a kinda J hip-hop place. Typical wannabes inside. The music was shit, but the worst thing was the feeling of agro inside. All the J boy hip hoppers giving nasty, if un-threatening looks, and made sure they gave us a brush as they walked past. One bloke in particular was looking to have some and Gezza almost obliged at one stage. No doubt they (guys and gals) were on drugs. A few chicks were absolutely spazzed on the shit. Gezza fired up at one point and yelled “Where the fark is Zulu? This place is shit! He needs to answer for bringing us to this shithole.” Zulu, in the meantime, was on the upper floor of the club, asleep at the bar. Note: In fairness to Zulu, nobody was ‘forced’ to follow him to this club.

We got back to Kobe in about 4 separate groups over a two hour period. Roy and Burkey were keen to do Maccas. The place wasn’t open til 6:30 so they waited the 20 mins til it was open. Pup and I headed back to the KRAC; he crashed out and I had a spew. Note: And in Pup’s word, there was a massive “ROARRRRRRRRR!!!!” that echoed through the walls of the KRAC clubhouse as Dino acquainted himself with the toilet face first.

Other events such as the “You snooze, you lose” and the “Where the f*** is my camera” incidents can be explained on request as this tour report has already taken up enough space.

By the power of 11 Wombats positive thinking (praying for rain), from 8am on Sunday it pissed down – thank god for that cause I don’t think we could have fielded a team – so the game was called off. In the arvo we went to the Great Hanshin Earthquake Museum, which was pretty interesting. Chuck had a sleep on the sofas in the lobby, which Shax got some good shots of.

All in all, a top weekend and successful Wombat’s first domestic tour. Hopefully it’ll become an annual event…