The 2011 JCL season came to an end for the Tokyo Wombats on Saturday in Sano as the home team delivered a demoralising semi-final defeat to the four-time division 1 champs. A lack of players had plagued us all year — and unfortunately, the semi-final was no different. Only 9 blokes, plus a cameo fielding appearance from Wombat veteran Steven Burke, was all we could muster, and so at the end of the day, the Sano team had more firepower to deliver the goods and book their place in the final.

The designated meeting spot of Mejiro station, instead of the usual Harajuku, could, as Jarrad Shearer apprehensively pointed out earlier in the week, prove to be an early morning “curve ball” for some over-enthusiastic rugby world cup supporters. So true were his predictions, as we all waited around for an extra 30 minutes or so for one Alex Howard. After yours truly commented that the missing individual had probably got his railway stations mixed up and gone to Meguro instead of Mejiro, that very prediction also came true when the big South African finally arrived in the back of a taxi, fresh from a lovely slumbering detour to Meguro station.

The Sano #1 ground had seemingly recovered from the ravages of the swollen Watarasegawa River brought about by the typhoon a couple of weeks earlier. Sano C.C. won the toss and decided to bat, with Munir and Naoki Miyaji opening the innings. An early breakthrough was made by Shax, however, as Munir squeezed one out to Rony at point, who performed a text-book “Asian squat” to scoop up the pill before it fell to ground. Captain Beath toiled away at the other end, never giving away too many runs.

Naotsune Miyaji joined his older brother at the crease and the two half-scots pushed the Sano total along to just over 50 in the 13th over before Koolhof lured the younger Miyaji into a full-blooded drive to mid-on, where prime Herschelle Gibbs Award nominee, Bainzy, was waiting. The ball stuck — N Miyaji out for 18. Daniel Mee, the hard hitting Kiwi of Hakuba, strode out next to face the Wombat music — and started off quite gingerly with a few tentative prods and pushes, nearly popping up a catch to Rhino at short mid-on.

Some tight bowling from Rony and the Russian for a few overs kept the Wombats in the hunt for another wicket as the players took drinks after 20 overs with the score on 86-2. Following the break, Miyaji and Mee started to get on top and play their shots at the very time the Wombats really needed a wicket to expose the weaker Sano middle order. Boundaries were coming regularly now, especially with only 10 men on the field for the TWCC. Rhino finally got the scalp of Miyaji following a lob down to long-off where Burkey was waiting with open palms. Gav urged his players to keep working hard to try and bowl out the Sano boys for under 160, but unfortunately, D Mee had other ideas and continued to briskly score runs at ease, even though he lost partners Fuji (caught Beath, bowled Baines), Rizwan (caught France bowled Koolhof) and Sugiura (caught Baines, bowled Shackleford) quite cheaply in the ensuing few overs.

The stocky ski-instructor crashed boundaries to all parts of the ground in a fine knock of 108, finally holing out to a well-judged catch on the boundary by Evan. One more wicket fell — Kano stumped by Dino off Rony’s bowling — and Sano completed their 40 overs with a very competitive 239 runs on the board.

After the break, the Beath/Shearer veteran pair opened the innings for the Wombats. We knew that a brisk start was needed, in addition to lots of runs from these two pillars of the batting lineup. Gav expertly banished the first bowl of the innings from Rizwan to the boundary, and the Wombats on the sidelines felt rather upbeat about the chances of pursuing the target with the captain in good form. Beath continued to target Rizwan, while Shearer offered solid support at the other end. The bad balls were sent to the boundary and the good ones kept out through some solid defence.

A couple of dropped chances by the Sano boys made it feel like it really was the Wombats’ day with the bat, and Dino made sure they paid by smacking a huge six over mid-wicket. Ironically though, it was a dropped catch that gave Sano their first breakthrough — Beathy skied a ball to a man in the in-field and ran the first while the ball was airborne, and then Dino called him through for the second upon seeing the pill spill to the ground, but alas, Beathy was caught short of his ground.

The Wombats new number three, Paul Shackleford, joined the dinosaur in the middle and proceeded to offer support with the occasional single amid a “minefield” of dot-balls. Shearer of course, continued to keep the runs ticking over, but was eventually bowled by a deceiving delivery from the younger Miyaji for 40. TWCC now 68-2 after 16 overs and well-behind the original required run rate of 6 per over.

Rhino intended to improve on his five runs for the year, but could only muster one before nicking one behind off the Sano captain’s bowling. By drinks, things were looking desperate, and Rony, armed with instructions to play his natural game (he tells us he’s a natural born T20 slogger), swung his bat wildly but only managed to give the keeper another simple catch. Shax departed next, falling victim to the Miyaji family combo, and the Wombats were all but beat.

The “Meguro Express”, Alex Howard, strode out to the middle but was quickly sent back by a girl — clean bowled fourth ball by Captain Miyaji’s better half. Hitchman and Koolhof both out for ducks and Baines was left not out with only one run to his name. After a solid start by the openers, it was a pitiful display by the Wombats with five wickets falling for only 12 runs. TWCC all out for 80. Japanese rep Rahul Kano finished with 3 wickets from only two overs.

Well and truly thrashed, the Wombats wished Sano all the best in the final as Gavin presented Daniel Mee with a bottle of Hardys Wine for his wonderful century. Evan Hitchman was judged best on ground for the Wombats, although he scored no runs and bowled no overs. Nevertheless, his energetic fielding and encouraging voice was well deserving of the award.

AFL grand final scores had been kept hush-hush all day so that the boys could rush home to the Shearer residence and watch the bit-torrent download while munching on the ex-prez’s famous barbecued lamb and chicken! The Meguro Express — quickly shortened to “Megs” by his Wombat peers — lead the combini charge with a 6-pack of Asahi for the very short ride home, and despite the depressing on-field result, the atmosphere in the van remained upbeat as the highlights of the day were recalled. 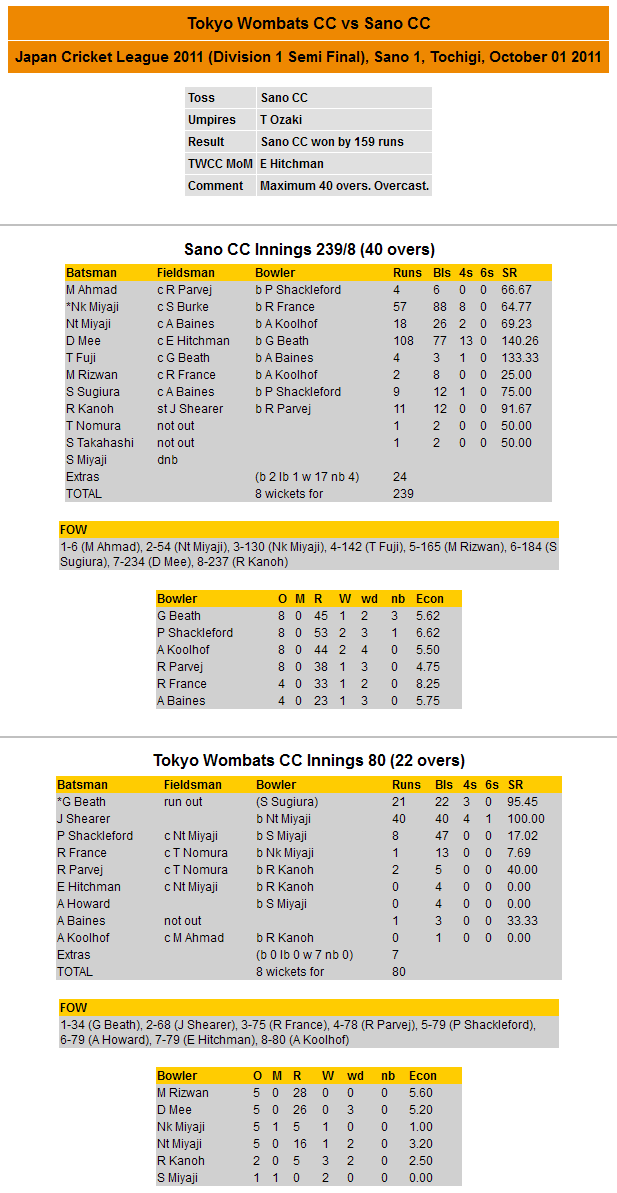 Hardys Man of the Match

Evan Hitchman
vs Sano (Oct 1, 2011)
Evan Hitchman picked up his first ever Hardys' MoM for the Wombats with an energetic performance in the field. The pint-sized Sydney-sider also took a well-judged catch on the boundary to remove the opposition dangerman and provide some semi-final spark for TWCC.