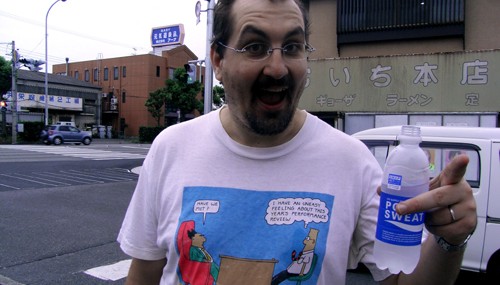 Congratulations to Jarrad Shearer on becoming the first Tokyo Wombat to achieve the prestigious milestone of 100 official appearances for the club! It is only fitting that the man we know affectionately as Dino(saur), the club’s founding father and lifeblood, is the first person to log 100 caps.

On this auspicious occasion, we thought a special blog post was warranted to highlight the highs and lows of his career with the Wommies, given that many of us have so great memories of ol’ Grumpy over the years. And we couldn’t have a special blog post without a few classic pics of the Grumpy One from yesteryear – you can find those at the bottom of this page.

Going into the 2017 season, the ex-prez was sitting on 97 caps. He had been out to bat 92 times, 18 of which he remained unbeaten – equal first in the club to only yours truly (but I’m a number 11) and one of the all-time great captains, Chuck Jones. JS amassed 2,700 runs from these 92 innings for a solid average of 36.49, with a highest score of 111. He has passed 100 runs on two other occasions, and belted 16 half centuries. He has hit 170 balls to the boundary, and cleared it 36 times. And as the Wombats’ regular wicket-keeper for many years, the bloke pouched 93 catches and made 20 stumpings! Streuth – some great stats there Dino – ‘respect for your tiredness’, as the natives in Japan quite often say.

Dino was more often than not, the bedrock of our batting lineup. Either opening the batting, or coming in at number 3 or 4, he would buckle down and play conservatively for most of his time at the crease. When the going was tough, he would dot, dot, dot. At the same time, the bad balls were usually dispatched to the boundary, or given the “gay dab” down to third man. In fact, Dino invented the bloody shot – and performed it on so many occasions with legs spread wide that his trouser seams came unraveled at the crotch, a moment gleefully captured on camera by resident Wombat photographer Shacksy. It was a sight to behold.

His resolute presence at the crease allowed his batting partners to play a more aggressive innings, and his booming calls of “NOOO” ensured that a run-out on his watch would rarely occur. A perfectionist at heart, when Dino did get out, he was usually absolutely filthy with himself. This led to many a dummy-spit on the slow trudge back to the hushed sidelines. Bats would be thrown and expletives spat forth like Lucifer on crack – it was a grand spectacle.

That said, his drive to secure the win for the team kept us in so many games, and also won us many almost single-handedly. His monumental effort in the JCL semi-final in 2006 against the British Embassy cannot be overstated. After making his first ton for the Wommies, the grumpy one removed and kissed his Wombats hat, then put it back on his stubborn head and kept on going. When he cut a ball to the fence for the winning runs, his celebration was characteristically animated, charging the Wombats bench, with rapid-fire double lleytons and a big fat “GET THAT UP YA!!!”

Now that we have the formalities and niceties out of the way regarding Jarrad’s cricketing achievements, let’s get stuck into the nitty-gritty and debaucherous side of this tea-pot posing, dummy-spitting, rocket science-advocating, poofta-drinking, puppy-dog t-shirt-wearing grumpy old man!

Fellow founding member of the club, Luke Ray, recalls the day most of us in the first ever Tokyo Wombats XI met Jarrad Shearer. It was at Koiwa station and Dino’s hair looked like he’d just escaped from auschwitz!? Apparently, batteries ran out on his hair clippers half way through a head shave. Rayos remembers thinking then and there that this is gonna be some f***ed up sports team. Other points to note about the human being that is Jarrad Shearer include his manky big toes – what unforgettable disgusting site. In-grown and yellow – they would often ooze with pus. But he was never shy about displaying them out in the open to his fellow team-mates.

We called him “Dino” for a good reason – he was always a grumpy old Dinosaur with something to whinge about. And he hates it when people spell his given name with an “E”. It was true though that in the early days of the club, there was so much to be done and organized, and Dino was one of few who got his hands dirty and did stuff. We are eternally grateful for all his hard work off the field. But geez he was grumpy most of the time! Although Dino was usually a beacon of positivity on the field (insert sarcasm), occasionally he’d spit the dummy – nobody has a better tea-pot impersonation than Dino! Five-time Dummy Spit award winner says it all really.

Dino also had a lot of fun touring, whether it be to Chiang Mai with the Wombats, or to overseas tournaments with the Japan national side. His foul mouth at times would cause a bit of a stir with the locals too, as former captain and fellow national side teammate Gavin Beath recalls: Dino was a proud Wombat for the Japan national team as a manager and later as a player. On one trip to Jersey in the late 2000s, he was the manager and it was the lunch break during a game. Dino was heard to bellow out, “RIGHT, NONE OF YOU C*NTS TOLD ME WE COULD HAVE LUNCH NOW!!!” upon seeing Beathy walk down the stairs with a delicious looking lunch plate and smile. Unfortunately, unaware to Dino, there were two high-society British ladies directly behind him dressed up for the occasion and elegantly sipping a cup of tea. They were both were so shocked at Dino’s uncultured outburst, one almost had a stroke and the other spilt her cup of tea over the concrete floor. Foul language was subsequently banned on tour.

And the tours to Kobe to play the KRAC were always fun-filled affairs. Who can forget Dino stopping the train from Kobe to Osaka for 20 minutes, and then arcing up at train officials and passengers who expressed their frustration at said delay. “Just having a few chi his, what’s your f***ing problem!?” Yes, Jarrad Shearer caused a train delay after nearly getting into fisty-cuffs with some pent-up hiroshi salary-man, who took offence (naturally) at Dino’s booming voice and tongue-rolling Japanese retorts. The stationmaster had to be called over to see what all the fuss was about. Excellent work Bugalugs. Two hours later early in the morning after a few too many chu-his, Dino would be found snoozing at the bar, or on a couch in a night-club.

And to Thailand. Curly picks up the story here: The Wombats were getting flogged by the Floggers & Robbers, who are a family team, wives and children around, so language warnings apply. Even to Jarrad. So every F-word was met by a vodka slammer, which Jarrad would wash down with a C**TS, which meant another slammer. Repeat. He tried to take over the fine session, more fines, more C-bombs, more fines. Repeat. Crawling on his hands and knees to the sight screen for a wee chunder. Crawling back and throwing up on his shoes. Throwing up in the pot-plants of the Porn Ping lobby. Winning the Turd Of The Tournament award in CM for (amongst other things) a bat throw (hard to believe, but true). He boasts that his name now sits next to Viv Richards.

On another Japan national team tour to Samoa in 2012, the boys were dancing the night away in a dingy club, and Dino disappears for 30 minutes before returning very quietly. Turns out next day that he’d gone for a quick round with the bald-headed champ in the toilets!

Some classic quotes from ol’ Grumpy include:

Booming voice in the izakaya: WHERE’S MY POOFTAS?

“How’s he going to hit the winning runs if they need 5??”- said Jarrad “It’s not Rocket Science” Shearer to teammates as the Wombats closed in on victory

“That’s the ‘ONLY’ way to take it!!”- was Jarrad Shearer’s response to a Wombat’s question upon exiting the team bus.

“No, I like ACDC. I just don’t like Bon Scott.”- TWCC President Jarrad Shearer making known his fickle musical tastes..

We should also point out that this 100th appearance for TWCC should be his 101st game, except he spat the dummy about an LBW decision (no, honest, he did…..) and got suspended. Curly remembers that the umpire was, of course, Sheikh Kizmyarz, head of the KCL at the time and Grumpy’s plan was not to apologise, but instead keep heckling Sheikh after the game, and then wanted to send him a 1000 word explanation of the LBW rules and why he was right. So, if Smoker hadn’t pulled him into line, he’d still be on 96 games.

I was privileged to learn a lot from the great man upon taking over the club presidency and I couldn’t have done it without his knowledge and guidance during the first couple of years. Noteworthy is that Dino has held many of the roles within the club at some stage or another, whether it be president, treasurer, captain, or vice-captain. He has won many of the club awards, including the worst-dressed award a few times: who could forget those howling wolves t-shirt, or the dewey-eyed puppies shirt! It was always a tight battle between Curly and Dino for the worst-dressed.

Always grumpy, a fierce competitor, and a great stalwart of the Wombats and Japanese cricket in general, our club wouldn’t be the greatest in Japan without his monumental efforts on and off the field. He is the club’s highest run scorer, he’s taken a few catches, performed the odd tea-pot or two, played the odd match-winning innings, thinks he is a bowler, founded the Club, put in shit loads of hours and emails and grief and anger and love, and we wouldn’t be who we are now without him – but really, who remembers him for that? Who else can shut down a train line with their personality?

We love you to bits Dino and we wouldn’t have you any other way – have a great match and celebrate in style with a few pooftas.

Alex Koolhof, with contributions from Wombats past and present